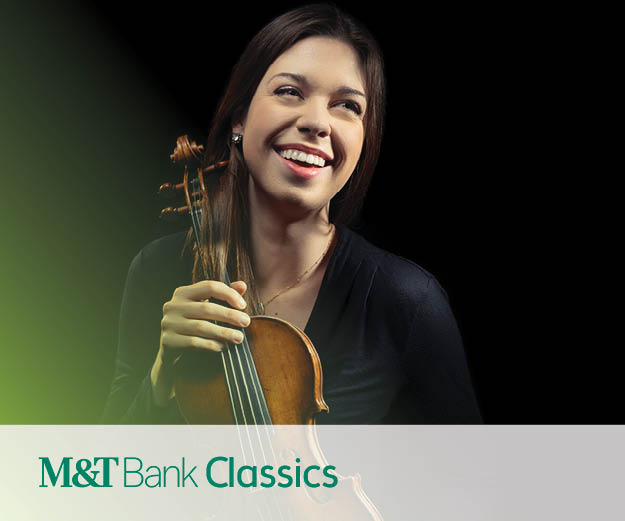 Silver Medalist of the 9th Quadrennial International Violin Competition of Indianapolis and winner of the Naumburg International Violin Award in 2012, Tessa Lark is one of the most captivating artistic voices of her time. She has been consistently praised by critics and audiences alike for her astounding range of sounds, technical agility and musical elegance.

Tessa is a recipient of a 2016 Avery Fisher Career Grant, and has also received a career grant from the Leonore Annenberg Fellowship Fund for the Performing and Visual Arts. Other awards include the first prize in both the 2008 Irving Klein International Strings Competition and the 2006 Johansen International Competition for Young String Players; and top prizes in the 2012 Fischoff National Chamber Music Competition as part of her piano trio, Modêtre, and the Michael Hill International Violin Competition in 2009.

A passionate chamber musician, she has been invited to many summer festivals including Marlboro, Yellow Barn, Steans Institute for Young Artists at the Ravinia Festival, the Perlman Music Program’s Chamber Music Workshop, and Music@Menlo. Tessa Lark is a member of the Caramoor Virtuosi and has participated in the Music in the Vineyards Festival, the Wadsworth Chamber Music series and Caramoor’s Rising Star Series. She has collaborated with a long list of renowned artists including Mitsuko Uchida, Itzhak Perlman, Miriam Fried, Donald Weilerstein, Pamela Frank, Kim Kashkashian, Peter Wiley and Ralph Kirshbaum. Tessa also participated in the 2012 Musicians from Ravinia’s Steans Music Institute concert tour.

Tessa started playing violin at age 6 studying with Cathy McGlasson. She joined the Starling Strings Program at University of Cincinnati’s College-Conservatory of Music in 2001 and studied with Kurt Sassmannshaus. She entered New England Conservatory in the fall of 2006 to begin studies with Miriam Fried and completed her Master’s degree in May 2012 under the tutelage of both Ms. Fried and Lucy Chapman. In addition to her busy performance schedule, Tessa has served on the faculty of the Great Wall International Music Academy in Beijing, China and as resident faculty at Lee University School of Music. As a From the Top alumna, Tessa plays an active role in their arts leadership program as a performer and educator.

Keeping in touch with her Kentucky roots, Tessa enjoys playing bluegrass and Appalachian music. She collaborates frequently with Mark O’Connor and is included in his CD “MOC4,” recently released in June 2014.

Tessa is currently participating in The Juilliard School’s prestigious Artist Diploma program under the guidance of Sylvia Rosenberg and Ida Kavafian. As part of her prize from winning the Indianapolis Competition, Tessa plays on the 1683 ex-Gingold Stradivari violin which is on loan to her for four years.

American-born conductor Ward Stare has been described as “one of the hottest young conductors in America” by the St. Louis Post-Dispatch and “a rising star in the conducting firmament” by the Chicago Tribune. Recently appointed Music Director of the Rochester Philharmonic Orchestra, Stare opens their 2014/15 season at Kodak Hall with a special RPO Philharmonics concert featuring guest soloist Midori. His current season includes a number of highly-anticipated debuts with orchestras around the world, including performances with the Baltimore Symphony, Sydney Symphony, Pittsburgh Symphony, Calgary Philharmonic, and the New World Symphony. He returns to the Lyric Opera of Chicago in November to lead performances of Porgy and Bess.

Stare’s frequent collaboration with the Lyric Opera of Chicago began with his debut in 2012 conducting performances of Hansel and Gretel. He returned to Chicago in 2013 to lead Die Fledermaus, for which Opera News praised his “piquantly effervescent concoction of Strauss’s exquisite score.” Mo. Stare led the Lyric Opera of Chicago Orchestra and Chorus in 2013 for his Millennium Park debut with sopranos Ana María Martínez and Albina Shagimuratova, tenor James Valenti, and bass-baritone Evan Boyer for LOC’s annual “Stars of Lyric Opera” concert. Following his critically acclaimed debut with the Opera Theater of St. Louis in 2013 conducting Il Tabarro andPagliacci, Mo. Stare returned to OTSL the next season for performances of Dialogues of the Carmelites. He made his debut with the Washington National Opera conducting Donizetti’s comic opera L’elisir d’amore in 2014.

Equally active on the concert stage, Stare served as the Resident Conductor of the Saint Louis Symphony Orchestra from 2008 to 2012. In 2009 he made his highly successful Carnegie Hall debut with the orchestra, stepping in at the last minute for Music Director David Robertson who performed the role of chansonnier in H. K. Gruber’s Frankenstein!!. The 2013-14 season saw his return to the Atlanta and Detroit Symphony Orchestras, as well as his debuts with the Syracuse Symphoria, the Jacksonville Symphony, and the Naples Philharmonic with Lang Lang as soloist. Other recent engagements include the Houston, Québec, and Dallas Symphonies, as well as numerous engagements with the Saint Louis Symphony where he served as a regular guest conductor on the orchestra’s 2012-13 Family, Special Event and Subscription series.

In August 2007, Mo. Stare made his critically acclaimed debut with the Cleveland Orchestra at the Blossom Music Center, The Plain Dealer praising his “clear and vibrant performance and keen ear for phrasing, balance and pacing.” Mo. Stare has appeared with the St. Paul Chamber Orchestra, the Moscow Chamber Orchestra, the Bangkok Symphony, the Colorado Music Festival and the DITTO Festival in South Korea, and has also led the Detroit Symphony Orchestra and the Deutsches Symphonie-Orchester Berlin in multiple engagements.

Highlights of recent seasons include being named ‘Musician of the Month’ by Musical America in November of 2011 and an invitation to participate in the prestigious Allianz Cultural Foundation’s 2012 International Conductors’ Academy. Over the course of four months, Mr. Stare worked intensively with both the London Philharmonic Orchestra and the Philharmonia culminating in Stare’s debut with the LPO in Royal Festival Hall in April of 2012. The 2010-11 season included Mr. Stare’s debut with the Norwegian National Opera in a new production of Britten’s The Rape of Lucretia. Critics praised Stare, the cast and orchestra for a“finely tuned [and] magical” production that “radiated musical quality.”

Stare was the recipient of both the Robert J. Harth Conductor Prize (2006) and the Aspen Conducting Prize (2007) at the Aspen Music Festival before spending the 2007-08 season as a League of American Orchestras Fellow with the Los Angeles Philharmonic. Stare has studied conducting with David Zinman, János Fürst and Jorma Panula, and worked with Michel Merlet in composition and musical analysis.

Following in the path of many great orchestral conductors whose careers began as instrumentalists, Stare was trained as a trombonist at the Juilliard School in Manhattan. At the age of 18, he was appointed principal trombonist of the Lyric Opera of Chicago and has performed as an orchestral musician with the Chicago Symphony Orchestra and the New York Philharmonic, among others. As a soloist, he has concertized in both the U.S. and Europe.