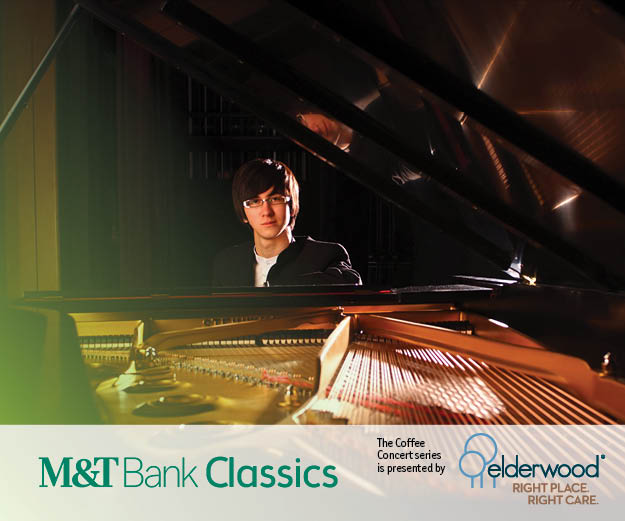 A red, white and blue celebration of American classical music kicks off with Gershwin’s “Rhapsody in Blue.” Grofe’s Grand Canyon Suite, Duke Ellington and John Adams are also featured in this program.

2014 Avery Fisher Career Grant Recipient, 2009 Young Concert Artist, 2010 Gilmore Young Artist, and Official Steinway Artist Charlie Albright has been critically acclaimed by The Washington Post as “among the most gifted musicians of his generation” whose “musical shape was never sacrificed to showmanship” and whose “impressive range of differently colored sounds at the keyboard was matched by overwhelming virtuosity.”  The New York Times praised his “jaw-dropping technique,” “intelligently wrought interpretation,” and “virtuosity meshed with a distinctive musicality.”  He is also described as a “poet of the piano” by Robert Sherman of New York’s WQXR Radio, and as a “keyboard wizard” who “played like an angel…with a level of polish pianists twice his age would envy” by New York’s Democrat and Chronicle. Having performed duets and chamber music on multiple occasions with such artists as cellist Yo-Yo Ma (four times) and such groups as the Silk Road Project (twice), the national and international competition winner has performed or competed across the United States, France, Australia, Norway, and Portugal. Vice President Joe Biden was quoted stating that “If I did my job as well as you (Charlie) do yours, I’d be President.”

He is the first prize winner of such competitions as the 2009 Young Concert Artist Competition, the 2006 Eastman International, 2006 New York Biennial National, and 2005 IIYM International Piano Competitions, and has won awards at the 2007 Hilton Head International, 2008 Sydney International, 2009 Top of the World International, and 2009 Vendome Prize International Piano Competitions.  He was awarded the 2010 Gilmore Young Artist Award and was recently named the Harvard University Leverett Artist-in-Residence for 2012, a position previously held by cellist Yo-Yo Ma in 1979.  He has performed with many of the world’s leading orchestras, including the BBC Concert Orchestra (2015 USA tour), San Francisco, Seattle, and Boston Pops Symphonies. Mr. Albright was selected by pianist Marc-André Hamelin to receive the German 2014 Ruhr Klavier Festival Young Artist Scholarship Award, including a debut concert in the 2014 Ruhr Festival.

Charlie completed his Associate of Science degree at the Centralia College during high school while studying with Nancy Adsit, and is the first classical pianist in the Harvard/New England Conservatory B.A./M.M. 5-Year Joint Program, where he received his B.A. in Economics at Harvard as a premedical student and received his Masters of Music in Piano Performance in 2012 with Wha-Kyung Byun.  He graduated with the prestigious Artist Diploma from The Juilliard School of Music with Yoheved Kaplinsky.  He is under management with Bill Capone of the Arts Management Group.