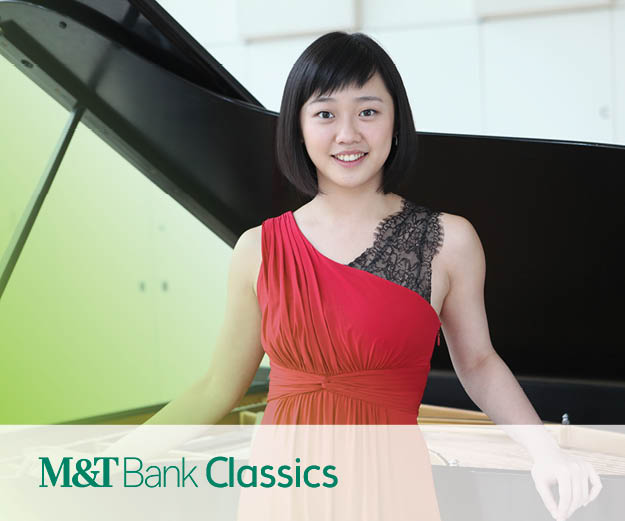 BRAHMS Variations on a Theme by Haydn
BEETHOVEN Symphony No. 4
SCHUMANN Piano Concerto in A minor

Praised for her “bountiful gifts and passionate immersion into the music she touches” (The Plain Dealer), Chinese pianist Fei-Fei Dong is a winner of the Concert Artists Guild Competition and a top finalist at the 14th Van Cliburn International Piano Competition. She continues to build a reputation for her poetic interpretations, charming audiences with her “passion, piquancy and tenderness” and “winning stage presence” (Dallas Morning News).

Her burgeoning career includes a number of prominent concerto engagements in the 2016-17 season, including performances with the Anchorage Symphony, Spokane Symphony, DuPage Symphony (IL) and a special concert with the Pacific Symphony, featuring Fei-Fei playing both Beethoven Concerto No. 1 and No. 4 with conductor Carl St, Clair at Soka Performing Arts Center in Aliso Viejo, CA. Featured recitals this season include the SUNY Purchase Performing Arts Center and the Howland Chamber Music Circle Piano Festival (both NY), Macon Concert Association (GA), and Atlantic Music Center (FL).  This follows a busy summer 2016 schedule internationally, including recitals at Spain’s Auditorio Nacional de Madrid, and in Shenzhen, China and Nantucket, MA, as well as a concerto with Germany’s Norddeutsche Philharmonie Rostock and chamber music at the Music at Menlo Festival.

Fei-Fei’s 2015 summer festival highlights include Bravo! Vail Valley, the Highlands Chamber Music and Lake George Music Festivals, and a recital for Chicago’s Dame Myra Hess Concert Series.  She was showcased prominently in the documentary film, Virtuosity, about the 2013 Cliburn Competition, which premiered on PBS in August 2015, and she has also been featured numerous times on New York’s WQXR radio.

Fei-Fei has performed in recital at Alice Tully Hall as the winner of Juilliard’s 33rd Annual William Petschek Recital Award.  Other notable recent recitals in the US include her Weill Recital Hall debut at Carnegie Hall, Gilmore Rising Stars (Kalamazoo, MI) and The Cliburn’s spring 2015 Chopin Festival, and in Europe at Warsaw Philharmonic Concert Hall and the Louvre.

She is a member of the Aletheia Piano Trio, which debuted at the Kennedy Center in February 2014 as part of its Conservatory Project, and performs across the US. Deeply committed to sharing her joy for music and connecting with communities, Fei-Fei also engages students and community audiences through frequent school and outreach concerts and master classes.

Born in Shenzhen, China, Fei-Fei began piano lessons at the age of 5. She moved to New York to study at The Juilliard School, where she earned her Bachelor and Master of Music degrees under the guidance of Yoheved Kaplinsky.

A compelling, insightful and energetic force on the podium, conductor Rebecca Miller is acclaimed by press and audiences alike.  Her sophisticated music making and evocative command of varied composers and styles, coupled with her ability to communicate with audiences of all ages, have resulted in her increasing demand as a guest conductor throughout the United States and abroad.

Rebecca’s recent guest engagements included debuts with the Orchestra of the Age of Enlightenment, London Philharmonic Orchestra, Royal Northern Sinfonia, BBC Concert Orchestra, BBC Scottish Symphony Orchestra, the BBC National Orchestra of Wales, and the BBC Proms. Rebecca conducted the World Premiere of ‘The Knife of Dawn’, an opera by Hannah Kendall, at the Roundhouse Theatre in Camden, to much critical acclaim. In 2016/17 she returns to the London Philarharmonic Orchestra, a season which also saw her appointed as Principal Conductor of the Bishop’s Stortford Sinfonia and continue her unique and ongoing relationship with the Southbank Sinfonia as one of their few annually-invited guest conductors. She will make debuts with the the Uppsala Chamber Orchestra in 2017 and the Buffalo Philharmonic Orchestra in 2018.

During 2015/16, engagements included a return visit to the Orchestra of the Age of Enlightenment at St George’s Bristol, to the Royal Northern Sinfonia, and to the Southbank Sinfonia with her usual offering of eclectic programming, and also guest engagements with the Bakersfield Symphony in California, the Solomon Orchestra at St John’s Smith Square, the London Mozart Players and the London Philharmonic Orchestra.

Most recently, Rebecca served as Musical Director for Magna Carta 800 at Runnymede, and on 15 June 2015 she conducted the London Philharmonic Orchestra, Temple Church Choir, the Choir of Royal Holloway, and the Royal Holloway Symphony Orchestra in a major event in the presence of Her Majesty Queen Elizabeth II of England, Prime Minister David Cameron, other members of the royal family, and 4000 dignitaries and invited guests from around the world, which included the world premiere of a specially commissioned work by John Rutter.

Rebecca’s previous CD releases include her 2011 disc for Signum Records,  featuring the world premiere recording of Aaron Jay Kernis’ inventive dramatic work, Goblin Market (1995), a setting of Christina Rosetti’s poem for narrator and large ensemble, with Mary King as narrator. The recording was critically acclaimed by International Record Review, Musicweb International, Gramophone Magazine, and Fanfare Magazine, among others, and received several awards – including an ‘IRR Outstanding Recording’ by International Record Review, and was chosen as one of Musicweb International’s ‘Recordings of the year’ of 2011.

From 2007 to 2010 Rebecca served as Resident Conductor of the Louisiana Philharmonic Orchestra in New Orleans, where she was artistic director of her own series, “Casual Classics.” From 2005 to 2007, Rebecca served as Conducting Fellow of The Houston Symphony, leading more than 70 concerts in two years, including her debut on the symphony’s classical subscription series, sharing the podium with Hans Graf.

In 1999, Rebecca Miller founded the London-based The New Professionals Orchestra, an orchestra comprised of some of London’s foremost classical musicians.  As Artistic Director, she has led The New Professionals in guest performances at London’s South Bank Centre, the BAC Battersea Opera Festival, and at various music societies and festivals around the UK.  The orchestra’s debut CD, entitled Lou Harrison: For Strings was released by Mode Records in 2004.  Featuring the world premiere recording of Harrison’s Pipa Concerto played by world renowned pipa player Wu Man, it is also the first complete recording on CD of Harrison’s Suite for Symphonic Strings (1960), and was chosen to feature on the soundtrack of Martin Scorcese’s film Shutter Island.

Born in California, Rebecca Miller completed her studies in piano at Oberlin Conservatory of Music. She studied conducting at Northwestern University and at the Aspen Music Festival, and was the Paul Woodhouse Junior Fellow in Conducting for two years at London’s Royal College of Music.

First Prize winner in the 4th Eduardo Mata International Conducting Competition, Rebecca is currently Music Director of the Royal Tunbridge Wells Choral Society and Orchestra, Conductor and Teacher at the Royal Academy of Music’s Junior Department, Director of Orchestras at Royal Holloway University of London and Principal Conductor of the Bishop’s Stortford Sinfonia.